As you may have realized by now, this little blog of mine doesn’t seem to have a particular theme or direction. It’s not even a regular thing anymore. It’s mostly because I myself have none of those things…

Huh… didn’t mean to say that I’m not regular… not that I’d talk about that. I just thought I’d specify, you know? (Okay, shut up Kat!)

And I would hope the name of this blog is indicative enough of that. So, it’s kinda cool, I think… every blog post I make should be like a little surprise, like those toys at the bottom of a cereal box.

Damn… I knew I was old, but… do they even do that anymore? I would think that they don’t.

So, let’s jump into it, shall we? Today’s theme is about movies. Some kind of list, if you will. Except it’s not about just any type of movies, no… only the weirdest ones I’ve seen. Because I LOVE weird movies, especially the B/horror ones. It’s like they don’t even care about being coherent, you know?

Yet, they kind of are… to some extent anyway. Coherent, yet massively weird.

First, a couple of warnings:

• Don’t expect A-list actors or directors in this list. Except one maybe, if I choose to talk about it.

• They all are horror flicks, because that is my preferred genre of movies.

• There’s no guarantee you’ll be able to find them if you decide you’re intrigued enough to watch.

• Some may be a bit gory at times, although I don’t enjoy that. Can hardly escape it nowadays.

So here’s my little list of weird movies. I’m linking the titles to their IMDB page, when possible that is. I will also be using the synopses and pictures I find on there. The trailers all come from Youtube. 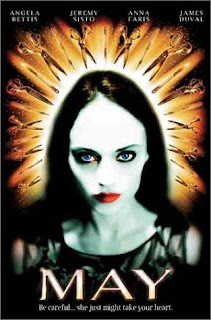 A lonely young woman traumatized by a difficult childhood and her increasingly desperate attempts to connect with the people around her is sent into a murderous tailspin. TRAILER

What makes this movie really disturbing is how real it could be, not that I know how “real” the title character’s particular mental issues are. Angela Bettis does a marvelous job at being just as creepy as she can be sweet. May wants to be loved so bad, it’s just heartbreaking, you know? And yeah, I did find myself kind of rooting for her, didn’t care how insane she was. Go May!!

Another great thing about that movie is the presence of Jeremy Sisto as that guy May wants real bad… damn, that boy’s voice does things to me, always has. And he’s pretty cute too, which is not a factor to be neglected. Then there’s this girl May wants (or parts of her, anyway), played by Anna Faris, who I like very much too. (I had forgotten about that until I looked up the film in IMDB… the things I forget…)

I really think you should watch it. And if you know me on a personal level, I have it on DVD. Just ask and I’ll lend it to you! 😉 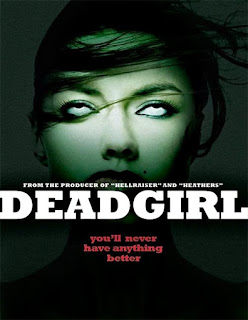 This is the most disturbing thing about that movie. It doesn’t matter that the girl’s undead, she’s still getting raped… repeatedly. (By only one of the boys, I think… I’d have to watch again to be sure). This definitely threw me for a loop. Yet, I still appreciated the movies because that very issue is kind  of brought up, by one of the two boys if I’m not mistaken. I don’t think there’s a definite resolution though. I would imagine it’s up to every person who watches to come up with their own conclusion. I myself think it’s disgusting in more ways than one… you know, necrophilia (kinda) and rape. I don’t care that she must not have been aware of what was happening to her, it’s still wrong as far as I’m concerned. If only for that reflection, it’s a good movie to see at least once. 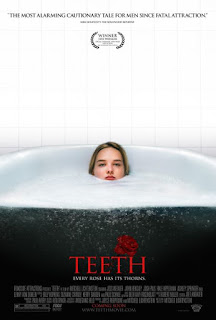 Still a stranger to her own body, a high school student discovers she has a physical advantage when she becomes the object of male violence. TRAILER

You may have heard of this flick already… if not, here’s the kicker: Dawn (Jess Weixler) has teeth in her vagina… working – and very sharp – teeth. And whoever tries to get in there uninvited gets chomped off and spat out. There’s a little bit of gore, but not too much. You know, there had to be that shot of a bloody scrap of penis because how else could we know what’s really going on? And, yeah… I’ll admit I found the movie pretty funny. Not because I have a grudge against the male appendage, but only because it’s actually funny. Told you I liked weird stuff.

If you ever watched Nip/Tuck, this movie also has John Hensley as Dawn’s creepy step-brother. Creepy, but still cute as hell. Or maybe that’s just me… gotta be glad that he’s not a teen like he seems to be playing most of the time. I feel less like a creeper to think that he’s super attractive.

AAAH! ZOMBIES!
(aka Wasting Away) 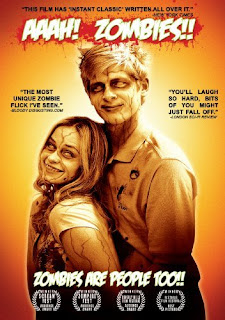 Turning the zombie film on its head, this film is an oddball comedy from the perspective of the brain munching monsters themselves. TRAILER

You know what? This movie is HILARIOUS! From the moment I heard about it, I had to see it. I’m not a huge fan of zombie movies, unless they’re different. And this right here is highly different. It’s real amusing to be able to get a glimpse into the zombie’s minds (kinda). The (very much B) movie is shot in both colors (zombie view) and black and white (human view).

There’s a couple of actors you may know, like Matthew Davis (Alaric Saltzman in The Vampire Diaries) and Michael Grant Terry (Wendell Bray in Bones). I’m not naming the girls because I didn’t find notable roles in their IMDB pages. Not yet, anyway.

TEXAS CHAINSAW MASSACRE:
THE NEXT GENERATION 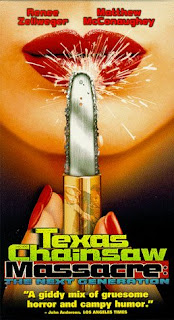 Turning the zombie film on its head, this film is an oddball comedy from the perspective of the brain munching monsters themselves. TRAILER

Would you believe me if I told you that this really bad movie saw the birth of not one, but two Academy Award® winners? I swear it’s the truth! If you saw the trailer already (or saw the movie, or the names on the pic above), then you know who I’m talking about. Yup, Renee Zellweger and Matthew McConaughey worked together on that little crooked gem.

Quite honestly, the movie itself isn’t that weird, it’s just awful… awful to the point of becoming hilarious. I still don’t know if that had been intentional or not. It’s making the list mostly because I can’t help but be amazed about its actors. I know they’re not the first good actors to make awful movies, but this one is one of a kind. So many weird stuff in there, the transsexual chainsaw wielding monster not even being the weirdest of things. You kinda feel bad for them, actually… they may be the most sympathetic monster ever, but still pretty dangerous. The ending is something else too… I can’t say too much, but it deserves to be seen. Creepiness guaranteed.

I think I’ll stop here… I’ve seen many more weird movies, but some were more mainstream, like Being John Malkovich or Eternal Sunshine of the Spotless Mind. I may make a list of my favorite movies someday and these two will most certainly make it.

I also decided not to talk about Tusk because I love Kevin Smith enough to dedicate a whole post to his work. Sometime in the future, it’s a promise (probably after I’ll have seen the last available movie he directed, Yoga Hosers). He’s got a lot more coming up, which makes me real happy.

I have to let you know, some of the movies seem to have been uploaded in their entirety on Youtube. I chose not to link those, mainly because the quality was questionable, with patterns and effects added to the film for some reason. I wouldn’t be able to watch them this way myself, too frustrating. lol

So I hope this new blog post gives you something to think about, look forward to, or even made you laugh a little. If you’ve seen any of those and wanna talk about it, please feel free to leave a comment. I’d love to know what your thoughts are.

Have a marvelous Monday and I hope to see you soon!

3 Replies to “I LOVE WEIRD MOVIES”