I love art… mostly of the painted kind. I mean, I love all of it, but I tend to be drawn (hah!) to painters more than other types of artists, like sculptors, let’s say.

This being said, I’m not a scholar. Don’t ask me what era this thing’s from or who painted it, there’s a big chance I won’t know unless it’s someone I already like or something so popular that even a chimp could answer. I also don’t tend to analyze what’s behind the artwork I’m looking at. Do I like it? Yes? Then that’s all I need to know.

Which might be why I don’t really go for things that are too abstract. I mean, I may find abstract pieces very nice, but again it will be a matter of finding it visually appealing. This might explain why Picasso’s cubism stuff does nothing for me. I really don’t get the appeal. What can I say, I’m a simple girl.

I realized a while ago that my favorite era for painters had to be the late 1800’s, early 1900’s. And, over all, I have four that I absolutely love. This being said, only two of them worked in that time period, the other two are (were) more contemporary. And by that, I mean the era, as one of them is still alive today (as I’m writing this, anyway). Maybe their style also would be qualified as contemporary. Honestly? I wouldn’t know. Like I said, I’m no scholar, never majored in art anything.

What I do know is that although I can find paintings of landscapes beautiful, it’s not what does it for me. What I prefer are people representations, hands down. And, apparently, I like them to be stylized, not just to be there on the canvas looking as if we’d just taken a picture.

Don’t get me wrong: I find the realistic type of art very impressive and beautiful, it just doesn’t make me feel anything special. But the painters I’m about to talk to you about? Something in what they do just tugs at my heartstrings. I guess that’s the whole point, isn’t it? And yeah, I don’t think I’ll be introducing you to anyone you don’t already know. Or maybe I will, who knows? I would imagine that the last painter on my list may be a new one for you.

So… let’s get started, shall we?

Oh, and here’s a little warning: there might be some sensitive artwork below. Nothing too graphic, I promise, but there’s still naked body parts. And no, I wouldn’t dare blurring anything or putting a little smiley over nipples or butt cracks. So be warned if you’d rather not see this. Also know that if you click on the links down below, you might be confronted to some of the artists’ less “safe for work” pieces. 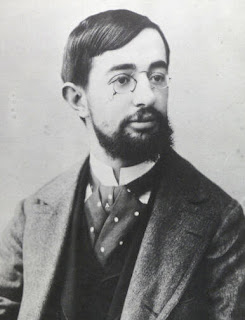 Okay, even those who don’t care about art would have heard the name of this French artist before. If only because they saw John Leguizamo portray him in Baz Luhrmann’s Moulin Rouge, the 2001 movie with Nicole Kidman and Ewan McGregor. And even if someone hasn’t seen the movie, they would surely have come across those advertising posters that can be seen pretty much anywhere nowadays.

I love how it somehow makes him an ancestor of those who, like myself, work (or worked) in graphic design. Maybe this why I like him so much. Nah… I just really love his style. (Source for all Toulouse-Lautrec artworks) 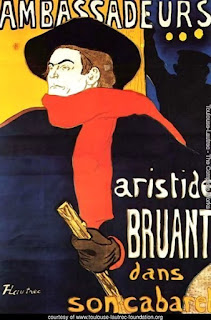 Ambassadeurs Aristide Bruant in his Cabaret (1882) 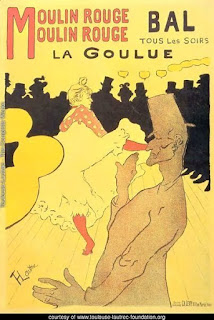 I can’t honestly say when I fell in love with this artist or his work, I’ve just always loved it, I guess. One of the highlights of my life has to be when I went to Paris years ago and went to the Musée D’Orsay. They have (had?) some of Toulouse-Lautrec’s work and I almost started weeping as I stood in front of a big (I’m small) painting of his. I can’t even remember what work of art it was that I got this emotional over. It doesn’t matter all that much, quite frankly. I love most of it, so whatever it was, it will forever be one of my fondest memories (for what’s left of it, anyway).

Here are some of his paintings… dang, they’re purrty! 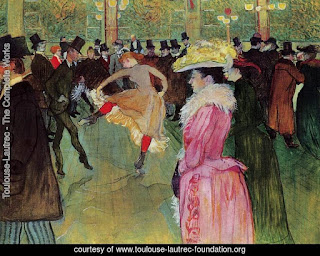 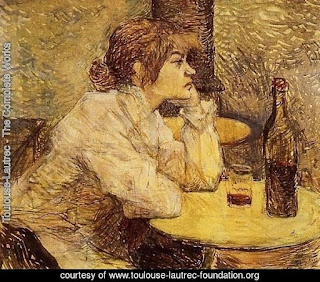 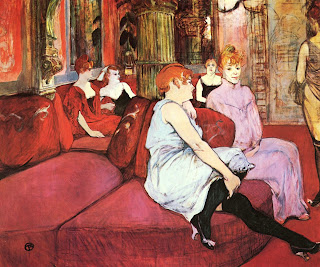 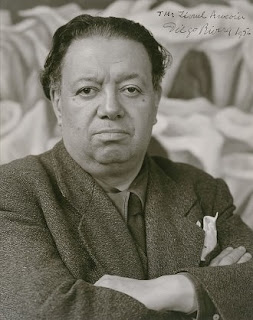 Although I got to know more of the Mexican artist through Julie Taymor’s movie Frida, with his wife Frida Kahlo being portrayed by Salma Hayek, I still knew and loved his work from way before that. For years, I’ve wanted to buy a reproduction of one of his paintings for my home. A nice one on canvas, you know? Of course, I would love to have the original if it were to be given to me… yeah, I’m pretty sure I’ll have to settle for a reproduction instead.
Again, a lot like it’s the case with Toulouse-Lautrec, I prefer his portraits over anything else he’s done. Well, anything with people in it, I mean. I just love the way he draws them, the dark colors, the shapes, everything. I just get washed over with a sense of peace when I look at his stuff, I can’t really explain it. Maybe it’s why I like him better than Frida (artistically, I mean). Frida’s work, although beautiful, is sometimes too unsettling for my taste, which I know was probably the point. In other words, I prefer the “calmer” type of art, if there’s such a thing.

Not to worry, I know some of Diego’s work is anything but calm. Like those amazing frescoes he made, filled to the brim with politics, and opinions, and rebellion. I’d love reproductions of those as well, but they were made to be enjoyed on a large scale. My walls will never be big enough. (Source for all Diego Rivera artworks) 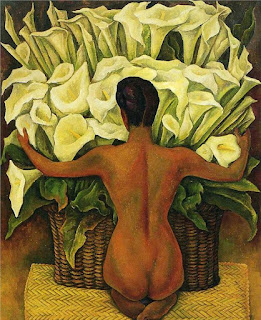 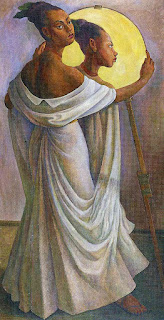 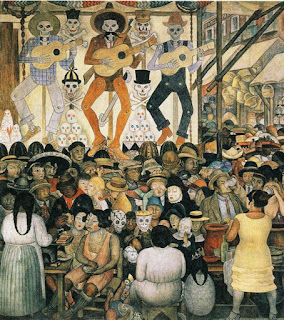 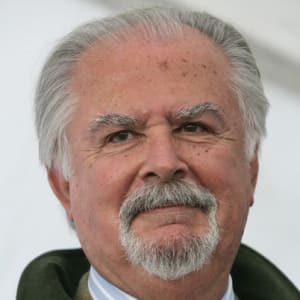 In researching Colombian artist Fernando Botero, I learned that he’s also a sculptor. Which is great, it gives me a whole bunch of new stuff to look up from one of my favorite artists. Sculptures may not be my go to, I can still appreciate it.

What is it about this man’s work that I love so much? Pretty sure it has something to do with the way he portrays people (are you even surprised at this point?). They’re all plump, and jolly, and so smooth looking. It’s both ridiculous and amazing, and I really can’t explain what it does to me. I mean, every person he paints looks like an overgrown baby. How is that any less than extraordinary?

Is it because I myself have spent my life struggling with my weight? Maybe! Although I like to think it has nothing to do with that. Can’t I just love something because I find it beautiful? I think I can. And as I said earlier, I’m not one to go and analyze everything to death, not when it comes to art anyway. I love it, and that’s good enough for me.

Something I also appreciate a whole lot about him his how he went back to the classics and decided to reinvent them according to his own aesthetics. I mean… a 12-year-old Mona Lisa? When I tell you his portrayal of people makes them look like overgrown babies! (Source for all Fernando Botero artworks) 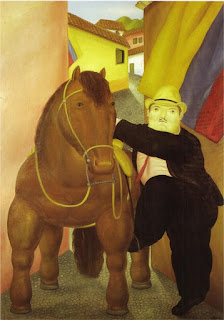 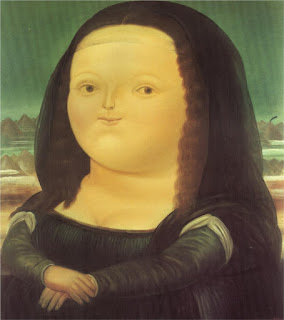 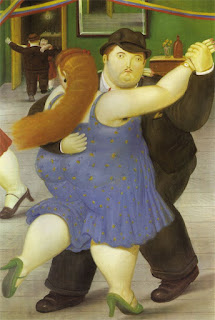 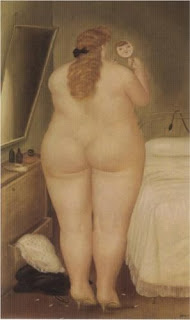 Now, the sculptures? Also amazing, the forms just as plump and bloated as they are when he paints them. I kind of hope they were squishy, too… they certainly look like it. And… now I’m imagining them as plushies. (Okay, that’s going way to far.)

Mostly, they remind me of those traditional Inuit soapstone carvings, something else I’ve always found very beautiful. 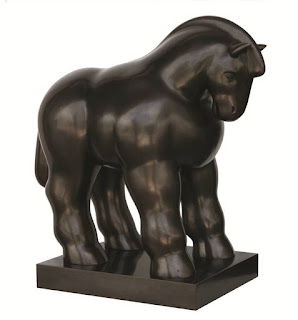 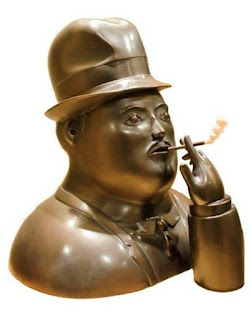 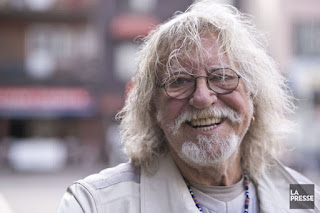 I’ve known of Paul “Tex” Lecor from as long as I can remember. Except at first, I knew him as a radio host here in the province of Quebec. My parents would listen to his radio show, one where he’d call up random people to prank them. It was quite popular back in the days. Tex Lecor wore many different hats through his whole career, but my personal favorite has to be his painter’s hat (a beret, maybe?).

Once more, for me anyway, it’s all about the way he drew people. Not unlike Botero, his style was a bit on the less realistic style, the people often looking thick and larger than life. My favorite paintings of his are the ones with the people drawn with big hands and limbs, as if the perspective is askew somehow. You know, a bit like those fisheye lenses? It’s almost cartoonish, but not really at the same time.

Again, I choose not to overanalyze why I like his stuff so much. I just do…

I have no idea how well Tex Lecor is known outside Quebec, or even Canada. I would imagine that those who know a lot about art would have seen his stuff. As I hope that if he’s known, he’s also appreciated. Anything to the contrary would probably break my heart.

Here’s a bit of his work for you to look at. I really wish I could have found the years for his painting, but I really had trouble finding a complete representation of his work. I think it is sorely missing not to have a website dedicated to this amazing artist, with a complete list of his work. Right now, all I could find were some art galleries selling his stuff. I mean, it’s better than nothing, but I feel like he deserves much more than that. Maybe one day, it will happen. Until then, here’s what I could muster up for you. Oh, and also, I’m including a personal translation of the title when applicable. (Source for all Paul “Tex” Lecor artwork) 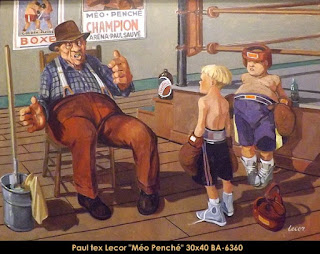 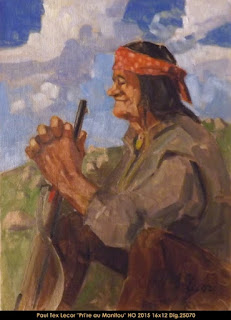 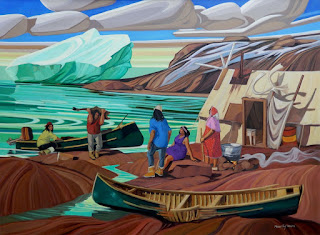 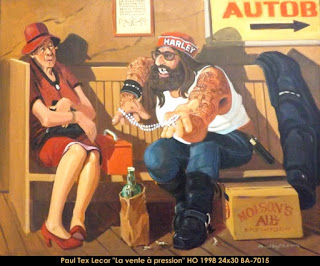 I love many, many more artists… I love Gustav Klimt and I do love Frida Kahlo despite what I said before (I think it’s a matter of mood, how I feel at the moment). Most of the time, though, I love works of art more than I love their makers. I’ll fall in love with paintings as a whole and appreciate them for what they are, not going out of my way to find out how made it.

Is it bad? Yeah, probably. I mean, when I hear a new song I like, I go and listen to the artist’s other stuff to see if I’ll also like it. Why would it be different with art? I wish I knew… I just think that I’ll take the time to look the artist up if what I see makes me weak in the knees or something. You know, the type of thing that just punches the air out of your lungs you find it so beautiful.
Of course, beauty is in the eye of the beholder, so I could understand that some of what I’ve shared doesn’t do it for you, or any of it. I’m totally okay with that. What I would love though is to see you share what artists, or masterpieces, do you think are the bee’s knees. I know nothing and wish to learn, and since I’m kind of lazy, I’d rather ask you to teach me.
I’ll end this here before I think of yet another artist I could talk about. I wish you all well, please be safe out there, and I’ll see you again for a new post next week.
THANKS FOR SHARING