Actually, you may end up laughing when I tell you about those stupid things that make me cry.

Why would I do this? Many reasons, but mostly I do find it hilarious myself. Not at the very moment it happens, but afterwards. And even if I know it’s ridiculous, next time I’m confronted with whatever made me bawl my eyes out, I’ll probably just do it again.

So let’s play, shall we?

Here’s a good one. I like to watch reaction-type videos on Youtube and I mostly have fun doing so. Especially when it’s those “Try not to smile or laugh” videos. Well, one I saw not too long ago (it should be one of those in the playlist I linked, can’t find it). I had to stop watching because I literally started weeping. The cause was that one clip, which is supposed to be funny I guess. I had seen it before and I knew how it went… I didn’t need to see (and hear) that shit again.

I can’t watch videos where people hurt themselves. I don’t watch fail compilations or any type of stuff where I might see people getting hurt. I can’t handle them and, well… tears (and a slight panic) happen.

Had another episode this morning… some video started playing automatically on Facebook (it does that on my phone, not sure why). It was about a puppy… A PUPPY! It had been thrown into a ditch and was yelping for help. I couldn’t watch it even though I knew the video would have a happy ending, the puppy being rescued and what not.

I still started shedding some tears and sniffling. My own dog came to see what was happening and, mostly, lick the tears from my face. It almost made me cry even more (no need to tell me it’s the salt he’s after… I know). Please forgive me for not looking for that video again. I’m not that much of a masochist.

Another Facebook video that started playing by itself was about yet another puppy, this one being thrown around and beaten up by some asshole lady. I’ll let you guess what happened… yeah… I wept again even though it only played for about three seconds. I still had time to see her hit the little guy.

I see what you’re saying… You need more? All right!

Told you yesterday about my love for music, right? Yup, that’s another thing I plan to talk about in a future post: Eargasms. And what are eargasms?

A sense of pleasure derived from listening to something, particularly music.

There’s another definition too, but that’s the one I’m referring to here. And yeah, eargasms will often end up with me crying… been happening a lot lately. I’ll keep the hows and the whys for another post. But I may or may not be crying over music on a daily basis.

Oh… and there’s that thing that happened last week. I can’t link to anything for that, I can only tell you about it. I was walking the dog and he likes to try and catch those pesky grasshoppers and crickets always flying around us. He finally caught a big, fat – and probably juicy – one but all he did was nip at it. Didn’t eat it, only mangled it enough so it wouldn’t be able to hop back home. And as I said, it was big… and I just couldn’t bring myself to step on it to end its suffering. Just imagining the crunch under my shoe… *shudders*

I know it’s “just a grasshopper”, stop judging me…

Anyway, didn’t shed a tear then, but I was a little choked up anyway… I tried to make Goliath (that’s my dog, see picture below) finish the job but he wouldn’t touch it anymore. It’s with a heavy heart that I walked away, up until I saw a bird dive down to grab the insect. Yeah, that was enough to make me tear up. I was so relieved that the grasshopper wouldn’t suffer anymore, you know? 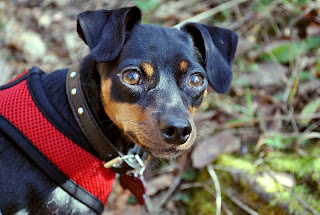 And the list of things that make me cry goes on and on. I only tried to list those I find a bit exaggerated for any normal human being. Those I can remember, anyway. Didn’t say a thing about me crying when I watch TV shows, or how some ads will make me cry (they do that on purpose to mess with me, I just know it).

I cry when people I love aren’t doing so well, although I usually try to wait until they’re away to do so. Wouldn’t want to burden them anymore than they already are. I cry when I get angry, when stressed, or even real happy… any occasion is good enough, apparently. I’m a real cry baby!

And the fact that it’s been worse lately kind of makes me rethink going off the antidepressants. Not to worry, it was at my doc’s suggestion and I’m doing it gradually, as I should. Or maybe I’m just more tired than I realize, which is always enough for me to start weeping at the drop of a hat.

I’m starting to think I should be an actress… one that specializes in overly dramatic scenes… they cry a lot in soap operas, don’t they? Yeah… just show me some lost puppy and I’ll cry the hell out of that scene!!!

This being said, I have no choice but to laugh at myself for crying so often. And I won’t cry if you too start laughing at me (my friends already do anyway). I certainly can’t start crying over that stuff now, can I?

Crying over the fact that I cry too much or that people mock me for it, that’s a step closer to being stuffed in a straitjacket, I just know it.

What about you? What’s that insignificant (or not) thing that will no doubt make you emotional? Feel free to share, I’d love to read you.

I hope you have a wonderful Wednesday and I’ll be seeing you tomorrow!!