I UPDATED THIS POST BECAUSE I HONESTLY THOUGHT MR. ROBOT’S THIRD SEASON WAS STARTING ON SEPTEMBER 21ST. TURNS OUT IT WAS SEASON 2’S FINAL EPISODE… SORRY FOR THE CONFUSION.

Television… I was such a TV whore before my depression. I was watching what I would call an unhealthy amount of shows at some point. Then I just couldn’t do it anymore (felt a bit like it still does with reading, as I shared right here). There’s only one show I couldn’t stop watching, the last one I’ll be talking about in that very post.

Anyway… since then, I’ve slowly come back to TV shows, binge watched those I had abandoned and started new ones that people raved about. Some are done with, others are still current. Those last ones are what I’ll be talking about. I have one of them starting tonight (missed yesterday’s other show premiere), so I thought it’d be the perfect subject for a post.

That’s another thing I used to do… I’d read all the Entertainment Weekly, Variety, and Premiere Magazine, made lists of what was coming and watched a whole lot of pilot episodes. They didn’t all stick, but I was on top of my TV game.

Not anymore. I don’t know what new shows are coming and I don’t even feel like looking it up. If something makes enough noise, I’ll hear about it and then I may start getting interested. In the meantime, here are the shows I’m just ecstatic to watch new episodes for. (I’ll probably need to do another one for the winter TV schedule, so don’t worry about me not talking about amazing shows that might only start somewhere in 2017).

As I did for my Weird Movies blog post, the links and pictures are from IMDB. And, you may notice that I often refer to old stuff when speaking of certain actors and what they were in. I feel more comfortable speaking of things I know so… yeah… sorry if I glossed over work or actors you thought should have been mentioned.

And also: SPOILER ALERT!!!  I’ll try not to give out too much, but it may just happen anyway… 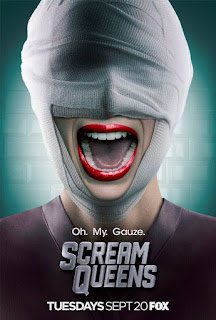 This show… it’s just hilarious. I don’t think there’s another pilot that’s made me laugh so hard. It might never happen again, you know? Being so delighted by a first episode of anything. I really reminded me of those Scary Movie flicks… the first one was just delectable, and so is this series. And yeah, the star power is amazing, in my own opinion. You know, Lea Michelle (Glee), Emma Roberts (American Horror Story), Abigail Breslin (Little Miss Sunshine), Jamie Lee Curtis (the ultimate scream queen from the Halloween franchise)… and the list goes on and on, would they have been there for the whole first season or just a couple of episodes. And the new ones this year should be just as impressive, with Kirstie Alley (Cheers) and John Stamos (Full House) as some kind of sexy doctor. I’m okay with that.

What I really want from that show, what I really need, is to laugh as much as I did last year. I need them to be just as crazy, and weird, and immensely stupid. Losing interest for lack of entertainment would be a real bummer! It just sucks that I can’t tell you how the second season premiere went because I was convinced it would be on the 21st… turns out it was actually on the 20th (so, yesterday evening). I know what I’m doing after I’m done with this! Wish me luck!

HOW TO GET AWAY WITH MURDER 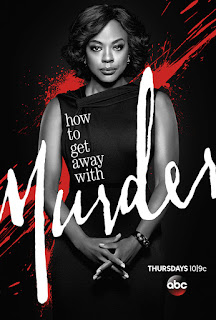 Would you look at that woman? Damn, she’s gorgeous… and such a marvelous actress. But yeah, that’s not what that show’s about, although Viola Davis (The Help) should be reason enough to start watching if you’ve never seen it. She’s nothing short of a queen, if you ask me. Doesn’t matter that her character, Annalise Keating, is sketchy as hell. If you don’t like the use of sketchy, let’s just go with strong, dangerous, and plagued with questionable morals.

Well… honestly, that could be applied to pretty much every character of that show, all personified by a great ensemble of actors: Alfred Enoch (Dean Thomas from the Harry Potter franchise), Matt McGorry (John Bennett in Orange is the New Black), Liza Weil (Paris in Gilmore Girls), Charlie Weber (Ben in Buffy the Vampire Slayer… still not over that, by the way), only to name a few.

If unrealistic (I imagine), this particular series is highly entertaining. To me, anyway. It starts tomorrow and I can hardly wait! 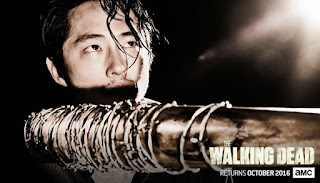 SPOILER ALERT!!!  Just in case you haven’t been watching already.

See this? The image I found for the new season? It better not be a damn spoiler… Because Glenn (Steven Yeun) can’t die, you hear?

Now that this is out of the way, if you’ve been watching this show, you also may be on the edge of your seat as you wait to know who gets killed by Jeffrey Dean Morgan (played the infamous John Winchester in Supernatural, Denny Duquette on Grey’s Anatomy, Edward Blake on Watchmen… you get the drift). Well, it’s really his character, Negan, who was introduced in the last episode of the previous season, that should be doing the deed. That’s another of his TV characters that may get hated. (I haven’t read any of the graphic novels, so I’m just going on what I’ve read about this character, which isn’t much.)

So, at this point, pretty much anybody could die. Will it be Rick (Andrew Lincoln), his son Carl (Chandler Riggs), or Maggie (Lauren Cohan, who also was on Supernatural in its earlier years)? It could also be Mishonne (Danai Gurira), Darryl (Norman Reedus), or even Carol (Melissa McBride) – but I’m warning you, it better not be any of those last ones or else I’m throwing a major tantrum. I NEED them in my TV, they’re just awesome characters.

Please note that I don’t remember if they were all there in that last scene, waiting to be eeny-meeny-miny-mo’ed. Maybe I should watch the last episode again before the next season starts.

To be honest, if Rick or even Carl were to be smashed over the head and killed by Negan’s trusty Lucille (his barb wire covered baseball bat, like on the pic above), I might not be as upset. Oh, I might cry over it, ’cause that’s what I do, but I’ll probably get over it pretty quickly. Or actually… just kill Rick, I don’t really care about him. 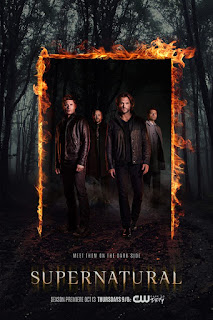 Now here’s what I’m here for… Supernatural! This here is my favorite current show. And if I were to rank it among every other shows I’ve ever watched, it’d be number two, right behind Buffy the Vampire Slayer. Supernatural is the only one I didn’t stop watching during that post-diagnosis depression of mine… oddly, it kept me afloat and even more oddly, this sentiment is shared by a lot of its fans. My “revelation” came during Season 8, which may explain why I love it so much although the most popular one is, for most people anyway, the 5th one.

This show is a record breaker in many ways, the most notable being how it’s the first of its kind to be running for what will now be the 12th season. TWELVE! And you know what, Season 11 was amazing. They were able to come back from many “meh” seasons and give their fans something meaty to chew on. If Season 5 is the most popular, I would think that Season 11 is a close second.

If you’re to look up numbers for that little gem, you may start to wonder how come it hasn’t been canned yet… the simplest answer I can give would be that it’s all about the fandom. They (and yeah, I’m one of them) are ravenous. I’ve never really been part of a fandom before so I can’t really compare, but I can easily imagine that it may be comparable to Star Wars or Star Trek… maybe not in numbers, but certainly in passion.

Anyway… I could talk about it forever. Just be grateful that I decided not to keep this for a full blog post (because I totally could… and I totally will if that’s what you’d like me to do). So, what’s to expect during that premiere in October? Let’s see… and again:

SPOILER ALERT if you still haven’t seen Season 11. (And I’m talking to you, little brother!)

Dean Winchester (Jensen Ackles) didn’t die as he should have, instead helping God (Rob Benedict) and his sister Amara (Emily Swallow) to kiss and make up. Dean’s brother Sam (Jared Padalecki) has been kidnapped by Lady Antonia Bevell (Elizabeth Blackmore), a member of the UK branch of the Men of Letters organization after magically sending the angel Castiel (Misha Collins) packing. Oh, and the Winchester brother’s mother, Mary (Samantha Smith), who died in the first episode twelve years ago (more like thirty years ago as far as the story goes), is back from the dead. That’s what happened on the last episode of Season 11… and there’s no way of knowing what’ll happen next.

As for me, I just wanna see my boys realize that Dean isn’t dead… because as far as either Sam or Cas know, Dean’s dead. And then, mom’s back… Emotional reunions are not only expected, but demanded. With tears… and hugs… and if there are to be kisses, then let there be kisses!

So, those are the shows I look most forward to this fall. I’ll watch some more but they’re not as important to me as the five I chose to talk about. (I had five before, but four is still a good number, you see?). I almost had six titles but I figured you would have had enough already. Still, I wanna tell you about those other shows. Just be glad I’m making a list rather than going on and on about them. And I’m not even talking about those French Canadian shows I might also be watching.

Shameless (which almost made it up there), Once Upon A Time (my least favorite in this list, yet I’m gonna watch it), Family Guy, The Big Bang Theory, Jane The Virgin (I need my narrator fix stat!), Vikings (damnit, I wanted to do an exposé on that one too!!!), Criminal Minds (with 2 major players gone, I’m not as excited anymore, even though I didn’t like Hutch that much), and Saturday Night Live.

What about you, guys? What shows are you most looking forward to? Do we watch the same things? Do you LOATHE something I love? Are there shows you can’t believe are not mentioned here?

Talk to me, I’ll be more than happy to respond, explain, and even discover new things.

I hope you have an awesome Wednesday and I’ll see you again on Friday, most probably.

P.S.: You know, a blog post every other day seems more doable than the daily kind… especially when they’re that long. Wouldn’t you agree?

P.P.S.: Just watched Scream Queens’s season 2 premiere and I had to correct something I had wrote. I had put Kirstie Alley as a player from the first season, even though I didn’t remember her at all… because it turns out that she’s in the second one… So, that’s corrected, sorry for the wrong infos.

P.P.P.S.: Yeah… I keep making mistakes… sorry about that! Should all be okay now!