I know some people can’t fathom the idea of having any type of noise as they write.

I do that sometimes, mostly by mistake. Up until I realize there’s no other noise than the clicks of my keyboard and it just starts grating my nerves.

If sometimes I choose to listen to my own music, I often come to find it a little distracting. Especially when a song I particularly love, or haven’t heard for a while, starts playing. Singing along while you’re trying to write doesn’t work really well.

So, the best for me is to go on either Google Play or Spotify and find the longest instrumental classic jazz playlist and let it run its course. I usually just zone out and can concentrate on what’s going on in my story.

I’d make myself my own classic jazz playlist but I don’t have enough albums to not get bored after a second time of it looping.

I’ve tried other genres, like trip hop, blues, or even classical… Nothing works as well as jazz for me.

Reminds me of that Homeland TV show (how I watched it for a season and a half is beyond me, it’s not my type of TV at all), where Claire Danes’s character would do just that; putting on some classic jazz to work on her stuff.

Oddly, I kinda felt validated when I saw that… thank you Homeland!

Something you should know about me is how I am restraining myself right now. Talking about music may be what I like most. Sharing about music, listening to music, doing whatever you can do with music… I don’t play it myself (not that I didn’t try as a kid, it just didn’t stick), but I do karaoke once in a while. That’s how far as I can go in saying I’m “making music”.

So, about me restraining myself… I really have this urge to talk about everything I like, would it be jazz or otherwise. Depends on who I’m talking to. Because I do like a lot of stuff. Still, you’d find it highly frustrating to try and talk about anything that’s highly popular right now.

I don’t listen to the radio… not much anyway. When I do, it’s in my car and it’s my favorite Montreal-based station that mostly plays classic rock. And then some less classic rock, but it’s still rock so I’m okay with it. We once had a jazz station but it’s defunct… how a jazz radio station would not survive in the city of a renowned International Jazz Festival is kind of jarring, if you ask me.

Most of the time, I’ll just plug my old iPhone in my car and listen to my own stuff. And it’s usually that one playlist of every single one of Coheed And Cambria’s albums, set on random.

In case you’re wondering (only because you don’t already know me), this is my favorite band ever. They’ve surpassed pretty much every other band or artist I’ve ever loved in my 40+ years of existence.

Now don’t get me wrong, I love a lot of other bands and artists (I’ll probably get into that in a future entry). I just don’t love them as much. And if I don’t stop myself now, I may just go on and on about why and how I love these guys as much as I do. And I really do feel like they deserve their own blog post.

Yeah, you read it right… I’ll be writing a whole post to rave about them. Someday.

Maybe next month after I’ve seen them perform at Corona Theatre, in Montreal. 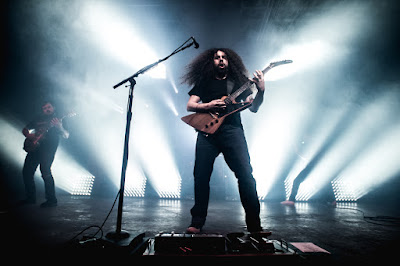 Frankly, I hadn’t thought about it… I’m sure his hair’s clean and all but… ew (as much for him as for me, really). Still, if I ever find myself with that glorious mane in my mouth, it’ll all be my little brother’s fault.

That’s my version and I’m sticking to it.

I wish you all a marvelous Tuesday, and I’ll be seeing you again tomorrow!

P.S.: You probably noticed how I’m including a whole lot of links and stuff… it’s just because I like the idea of providing people with more than I care to write (imagine if I explained everything, it’d be boring as hell). Some stuff, you may already know about, some you may not. It certainly doesn’t mean there’s any type of sponsoring going on! (mwhahahaa… as if I’d have a sponsor… it’s my third blog entry!!! I crack myself up sometimes.)

So that’s it… toodles for now!